Creativity as Sacrifice - a vision for artistic life 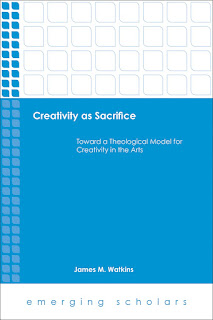 I have recently purchased a hard copy of the newly published book of the correspondence of Vincent van Gogh.  The purchase was. you will understand, purely as a birthday present to myself.  The book offers readers a “highly accessible book [that] includes a broad selection of 265 letters, from a total of 820 in existence that focus on van Gogh’s relentless quest to find his destiny, a search that led him to become an artist …”  (Ever Yours: The Essential Letters by Vincent van Gogh, edited by Leo Jansen, Hans Luijten and Nienke Bakker. Yale, 777 pp, £30.00, December 2014, ISBN 978 0 300 20947 1)

An article in the London Review of Books stimulated my interest in the van Gogh book.  The review talked about how van Gogh’s paintings have been able to maintain their startling presence when we see them today as when we first saw them.  The paintings retained their creative force even as our view of works by painters of around the same era may have become more refined.  Van Gogh may have reacted against the strictures of the Dutch Reformed Church in his youth but chose its opposite, evangelism, rather than atheism.  As the reviewer suggested: That he eventually became an evangelist for colour is our gain.

The discussion around van Gogh was, for me, at the pointy end of what is important and interesting about Creativity as Sacrifice: Toward a Theological Model for Creativity in the Arts by James M. Watkins.  Watkins teaches humane letters and Bible at Veritas School in Richmond, Virginia in the United States. He also holds an MCS in Christianity and the arts from Regent College and a BA in studio art from Wheaton College. This volume is based on a thesis completed at St. Mary's College, University of St. Andrews under the supervision of David Brown.

Watkins remarks how “creativity” is usually viewed as being an expression of one’s individuality but is often “an exciting discovery” of one’s relations at all levels.  He also notes how it is surprising how few theologians have seriously engaged with the topic of creativity.

A model is described as a systematic metaphor that “mediates” some area of our experience by organising and valuing it.  A theological model draws on resources of a Christian theology and can make a unique contribution.

Watkins suggests that a theological model for human creativity is “like an invitation to join in the creative vision God has for the world, and to embody this vision in one’s own creative work.”  It is an ambitious goal in a world where it seems everything, even creativity, is dominated by algorithms.  The goal of human creativity, he says, is not simply the transformation of the world to suit our own preferences but should also include “a dimension of respect for our materials, traditions and communities”.

However, he suggests that a theological model “is like a two-way street because it speaks about both God and the world” in that such models bi-directional.

Watkins asks the reader to think about God as one who engages in the creative process.  As a result, he suggests that the Christian life is essentially creative.  At the same time, he notes how theological metaphors exist in sayings such as “God is my rock” or “The Lord is my shepherd”.

A theological model for human creativity in the arts, he argues, is like a vision that God invites the artist to embody so that “it shapes the way the artist thinks about and engages in artistic creativity.”  Far from being a solitary artistic genius, as we might view van Gogh, “one who patterns his creative work after the redemptive love of God in the incarnation may find one’s self involved in a risk and vulnerable endeavour.”

On the other hand, a creative church will be “a church open to the possibility of mistakes and failures as it humbly seeks to add value to this world” by bringing forward and making real love and justice.  Watkins concludes that his theological model proposes that human creativity is a “respectful discovery of God’s gracious gift of creation” as well as “an imaginative transformation of that same gift”.

I encourage writers to “breathe deeply” to bring them closer to an understanding of what they are trying to say, or the truth of their stories.  Watkins’ thought-provoking and reflective book may be the work of a theology academic, but it reaches into the heart and soul of our deepest creative processes.
Posted by Mike Smith at 4:41 PM No comments: