Don’t give up your day job, says Emma Mildon when asked what advice she would give aspiring authors. 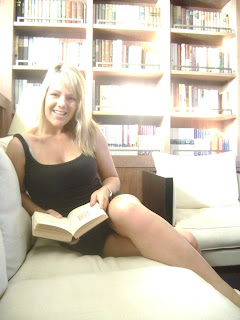 Emma, pictured, provided this assessment during an interview with me during her return to New Zealand from the United States where she has been building a career as an author, columnist and publicist. [Hear more on her thoughts in the BMS PODCAST]

I was interested in her views on getting published in New Zealand, because this is the kind of feedback I receive constantly when I work with writers.

Emma, 26, writes about abandonment for children, particularly around adoption, fostering, and divorce. As she says in her PR message, ‘the Tweenage market is ready for fun, juicy, real young adult self-help material’ and Emma has the books, content and the teen following to prove it.

‘My message is pretty simple – it’s about you don’t have to know your family history in order to make history,’ Emma told me.

However, it’s also a story told from an American perspective rather than the New Zealand one for which it was originally written, something Emma finds disheartening.

Emma says there’s a very good reason why this is and why she took the plunge to head to the US for help in becoming a published author.
‘In New Zealand and Australia the only thing you get back [from publishers] is rejection letters.’

In the US, Emma has worked with editors in California, where her agent, Randy Peyser, is also based. As a result of her new connections, she was invited to New York to meet the CEO of the big self-help publishing group, Hay House, and to attend the kind of workshop she believes is essential for prospective authors and other creative people looking to market themselves and their products.

During the ‘Movers and Shakers’ event, those attending were taught how to build a platform from which to launch themselves and their work.

‘It is really amazing what the workshops give people who want to get into the industry and want to get heard or published. They are giving them knowledge and it’s not just generic knowledge but on a one-on-one basis.

‘This is something New Zealand and Australia need to do and something the publishing professionals should be offering, because we are so innovative.
Kiwi creatives are leading the world in terms of how get ourselves out there, because we are at the bottom of the world; middle earth is a hard place to get your message out from.’

Emma said her road to get where she wanted literally started with Google, and typing in what she wanted and started researching. Once linked with her agent, she was then connected to a writing and editing service, where her work was taken apart and put back together again.

Emma says the lack of similar services in New Zealand, where a rejection letter if you are lucky is the usually the only feedback for budding authors, is damaging for creative talent. She gives the Flight of the Conchords, the New Zealand-based comedy duo composed of Bret McKenzie and Jemaine Clement, which went overseas after their television series concept was rejected in New Zealand, only to go on to global success with a TV series.

It is safer for publishers to go with more established writers rather than take a risk on a ‘nobody’.
‘If I was starting out and wanted to get published, I wouldn’t start in New Zealand. I would start in America and start networking and going to agents to help build a platform.’

However, asked about funding the editing and learning work she has done, Emma recounts what she heard recently from CEO of Hay House: ‘The first thing he said to us was ‘The number one rule in terms of getting published and getting your name out is keep your day job. Don’t quit your job and put all your energy into making this happen, because you need to be able to support this and you need to be able to make money’.

The most cost efficient way was for authors to spend their time building their own platform as a hobby and networking, with any money spent on improving their work rather than publicising themselves.

To hear more details of this conversation, listen to the podcast of our discussion.