Dig this book on scratching out a living writing 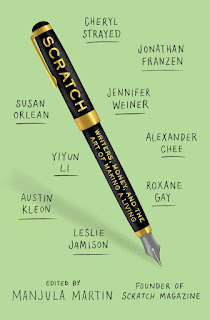 If you have an epiphany along the lines of “This year I’m going give up my job and focus on my writing”, you would be well-served to read Manjula Martin’s book.  Scratch: Writers, Money, and the Art of Making a Living provides readers with many useful insights into the challenge writings face when making a life for themselves and their writing.

For some, the path is quite straightforward – school, college, agent, publication.  For many others, it is a rocky road littered with broken promises and fading dreams.  However, even for those whose road through the literary world seems smooth, most experience potholes and patches.

The authors included in this book are either interviewed by the author and their experience presented in a question and answer format or have taken the opportunity to write about their experiences.

Both have have advantages and disadvantages: Allowing the authors to write about the experiences brings a personal element to the expression of their experiences regarding their journey to writing for a living.  However, the Q & A format allows the author to press the writers in regards to their perceptions.  It would have been good had Martin been able to ask questions after authors had presented their pieces.

As the Q & A with Jonathan Franzen illustrates, the successful author’s outrageous fortune has its share of slings and arrows. In his chapter entitled “Like a Fish in a Tweed Suit” Franzen says he was never in writing for the money.  “I think the literary novelist who makes money is like a fish in a tweed suit.”  He also admits life has got harder for “mid-list” writers who have had some success but have not reached the levels of multiple publishing and film deals.

The opposite to stellar success is, inevitably, failure, as underlined by Nina MacLaughlin’s With Compliments, recounting the experience of waiting to break through: “Time pressed and question marks hovered like hummingbirds gone desperate and mean.  Failure, my brain told me, Failure.”
MacLaughlin, like others in this book, has written free of charge while on her journey, although she mostly tries not to and instead returns to working with wood in buildings.

“People wonder when you’re allowed to call yourself a writer.  I think maybe the answer is when you recognize that it is work.”

Sometimes, however, there are no easy answers.  Daniel Jose Older in Diversity is Not Enough: Race, Power, Publishing talks about how “The disproportionately white publishing industry matters because agents and editors stand between writers and readers.”

Do you write and get published because of your colour?  It would seem so, as Older notes: “The publishing industry looks a lot like one of these best-selling teenage dystonia: white and full of people destroying each other to survive.”

The reality for many writers, however, is that asking for money or otherwise selling their work is an uncomfortable experience.  Others have a knack of happening upon sources of income by either professional/academic means or by utilising the resourcefulness inherent in their own background.
J. Robert Lennon in “Let’s Suffer, Let’s Stave” makes the point: “There is writing, and there is commerce, and between them stands an impenetrable wall…” in regards to authors and their relationships with agents and publishers.

Editor/author Martin’s story “The Best Work in Literature” is closer to my experience as she recounts her first job as an eleven years old “stock girl” working in her grandmother’s houseware store.  The real powerhouse of the store was the basement “where the money lived” in stock and trade, much like the working writers’ who earn a living from a “day job”.

I am reminded of my own experience as I write this review during the 2016-2017 holiday season.  Our family bought a Christmas tree in a bucket one year when I was a kid.  Dad being dad planted the tree in our front yard so that we had a free supply of trees for the festive season from then on.
It turned out that I was quite lucky too.  That first tree grew and was pruned to stunt its height, making it the opposite of a perfectly-formed specimen.  Although one of the ugliest trees around, it did have the advantage of lots of branches.  Each Christmas, we would lop one of its branches off and use that as a tree – saving dad the cost of buying us another one.

I would climb the tree and cut down as many of the branches as I could.  Anybody who has tried to cut pine branches in the tree with a handsaw will know that’s not many, particularly if you are a nine-year-old kid.

Armed with my branches, I would go door-to-door trying to bring Christmas cheer to each household, at a small price.  Do you know how hard it is to carry branches of a pine tree when you are a kid?  The pine needles look cute and they smell beautiful but they are sticky in both meanings of the word.
Our Christmas being summery, sap ran over me as I had to wrap myself around the branches in order to haul them behind me.  The needles not only stuck into me but also stuck to me.

By the end of the exercise, I must have looked like a wide-eyed sticky tree gremlin rather than Santa’s little helper.  Nevertheless I always sold enough to make my discomfort worthwhile, although I think the mums maybe gave me the money out of pity, particularly if my wide-eyed little brother was along with me.

Years later, when a local newspaper editor wouldn’t hire me because my wife was the news editor for the town’s radio station, I set up a freelance news agency while writing my first book.  Selling stories became my stock-in-trade and was a doddle compared to selling prickly, sticky “Christmas” trees.
Manujula Martin has compiled an excellent book reflecting the experiences of a wide range of writers.  The book is a very good foundation document for new writers and those looking for guidance or reassurance on their pathway through publishing.
Posted by Mike Smith at 2:41 PM